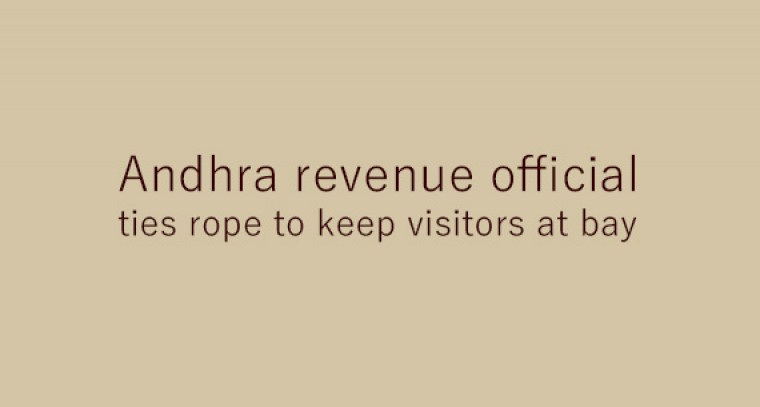 After the horrific incident of a Telangana government official who was burnt alive by a man in her office in Hyderabad, a woman official in Andhra Pradesh's Pathikonda has tied up a rope in her office chamber to prevent visitors from coming too close to her.

K. Umamaheshwari, a tahsildar or Mandal Revenue Officer in Pathikonda in Kurnool district tied the rope like a 'Lakshmanrekha' for the people visiting the office.

The official said she was forced to take this step for her safety in view of the fears triggered after November 4 incident in Abdullapurmet thasil office on the outskirts of Hyderabad.

MRO Vijaya Reddy, 37, was burnt alive in her office by K. Suresh over a land row. While the official was charred to death, her driver who sustained burn injuries trying to save her died the next day. Suresh, who too was caught ablaze, succumbed on Thursday.

Umamaheswari said the ghastly attack has created fears in the minds of officials in both Telugu states, especially revenue officials as they deal with the land issues.

She said she would receive the petitions from visitors over the rope and would not allow them to come close to her. The visitors in revenue offices are allowed to sit near them and submit their representations.

After the picture of the official tying the rope went viral over social media, senior official persuaded her to remove it. She, however, directed the staff to regulate the entry of visitors into the office. She said nobody would be allowed during lunch hour.

Vijaya Reddy was attacked in her office chamber during lunch hour.